With USC Clubs Week coming to an end, be sure to stay involved with your campus community

With USC Clubs Week coming to an end, be sure to stay involved with your campus community 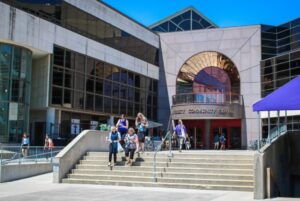 It’s that time of year where executive applications are released and clubs look to recruit new members during Clubs Week, which took place  from September 21st – 25th.

As virtual booths and Zoom meetings were held throughout the week in lieu of physical booths and general meetings, first and upper-year students alike are probably having the age-old debate about whether they should get involved.

This hesitation is understandable – there are a lot of options to weigh and factors to consider. For one, fees: if you are going to pay to join a club, you want to be confident that it will be worth it.

Word of advice from someone who joined three clubs she never attended in first-year: Take your time. Attend general meetings to get a feel for not only what the club does, but the people in it; you will be spending a good amount of time with your fellow club members if you commit to joining. You can pay for membership up to February 2021 on the Western USC Storefront.

It’s my third year here at Western, and in that time, I have joined a handful of student groups on campus. Some of them were hired positions, and some were general member positions..

But I’m glad I gave them all a chance. I found out what I was interested in and not so interested in. I met like-minded people who I would not have met otherwise and who I would go on to form close relationships with. Moreover, through involvement on campus, I finally felt like part of the Western community.

So if you’re sitting there scrolling through the 200+ USC clubs and thinking you want to dabble in something new, go for it.

You have nothing to lose except the little time it takes to realize whether you enjoy it or not, and who knows, you might end up finding your people or discovering what you find fulfilling.

If you don’t know where to begin, I suggest trying the USC Club Matcher.

Another common worry students have about taking on new roles during the school year is time management. You are a member of the community, but you are a student first and foremost.

If you find that extracurricular involvement is taking up an alarming amount of time or getting to be overwhelming, take a step back and re-evaluate your commitment. To some, the extra work might be welcome, but that does not apply to everyone.

The advantages of involvement are great in moderation. Even if you are just trying a few clubs out, narrow it down to the two or three choices that you are most interested in. And be proactive by ensuring that you have time for what you are signing up for.

Your extracurriculars should accentuate your student experience, not take over.

Roles acquired through applications function in the same way. While responsibilities are greater and there is less time to be involved in other student groups when you have a designated role in another, you benefit from being more involved in the team.

For me, the most harrowing part of applying for positions has always stemmed from imposter syndrome. I have never felt as qualified or hardworking as those around me. And that’s perfectly normal.

You might look at an application and think you won’t get the position, so you might as well not try, but you’re not alone in thinking like that. You might get rejected a few times (it happens to the best of us), but it’s better to try than wish you gave it a shot.

It’s cheesy because it’s true, but leaving your comfort zone promotes growth. In every application you submit or election you run for, you embrace fears, and it makes you less likely to fear trying again.

And this doesn’t just apply to USC clubs – go for that internship, part-time job or volunteer position off-campus; submit your work to student publications; apply for those scholarships.

You have a lot to offer the Western community, so with Clubs Week wrapping up, give yourself a chance to try something new. And if you catch yourself asking “should I?,” maybe you should.

The USC Clubs System has more than 200 Ratified clubs, and is linked to your faculty students’ councils. For more information on USC Ratified clubs, see here. To learn how to start your own USC Club, see here.

Receive the latest and greatest by subscribing to our newsletter